From Ausencia To Concepción

The odd manner through which the drawings by Ausencia and Concepcion Abasolo became part of Antonio Alvarez’ plentiful collection of images has raised such a wave of visual speculation that we can barely navigate it. The mimetic power from the sisters’ drawings – inspired by popular European lithographs – forces us to perceive the models’ eyes who pose indifferently from a past out of touch. Let’s not forget that an image summarizes the tense coexistence of many times. Nonetheless, Painting and Drawing are spatial and not temporary arts according to the Classic conception. But is this true?

Pulled by a rare hallucinogenic drive, Antonio Alvarez set out to give a new life to the works by the Abasolo sisters and display a new time dimension for us to experience whenever we watch these watercolors. The impossibility of the fixed image rules no longer and now the foundations for a new expansion time are laid.

In this time, the image spreads out to the space and overfills the absence (‘Ausencia’ in Spanish) with prolific conception (‘Concepción’ in Spanish) originated by the artist’s scopic and iconic drive, i.e. his desire to watch and thus find shapes. However, not only many times coexist in Ausencia and Concepcion Abasolo’s updated collection, but also an unending search for figures that guides our eyes from one spot to another.

There we find the artist’s vast visual repertory. Working out his pareidolia1, Antonio Alvarez jumps either from the Italian Quatrocento to Viceroyal New Spain or from Middle Age’s Bestiary to Pop-Art and thus creates new visual compositions that awake our own desire to find recognizable figures. This stimulates our double perception wherein we compare what the artist saw in the ausencia with what we see in the concepcion.

Holy Water has a key role in this intricate polysemic game. If you add Antonio Alvarez’ highly praised plastic ability to the mystical component – which has the power to consummate an act of visual thaumaturgy2 through the sacred fluid – then you will be able to see – as the result of hierophany3 –  what otherwise would be invisible without the interaction of three elements: the highly aroused imaginary world of the artist, the “mysterious” advent of the drawings, and the divine intervention. So, all of this makes the miracle happen: where there was ausencia yesterday, there is concepcion today.

Iconosphere = Universe of images that is an important field of every individual and community’s visual perception.

Pareidolia (from the Greek para (παρά) «beside, alongside» and eidōlon (εἴδωλον) «image, form, shape») = It is the ability to “find” that two different forms are alike. It is a psychological phenomenon where the visual perception of some aspect of the random surroundings may turn it into a recognizable form. It is a mental ability of our visual intelligence. The likeness does not really occur in the physical manifestation of the object but rather in our subjective experience. (Reina)

Apophenia (from the Greek apo (ἀπό) «separate, distant» and phainein (φαίνειν), «appear, reveal as a phenomenon, fantasy») = It is a “vision without any connection” and “distinction of perceptual alterations where an individual with a poorly structured field of perception thinks he/she is perceiving something different and mixes the perception with a fantasy (Reina)”

Hierophany (from the Greek hieros (ἱερός) “sacred, holy” and phainein (φαίνειν) “to reveal”) = It is the association created by an individual between an unintended, random visual experience and an intentional visual manifestation whose source is believed to be mystical (Reina)

Iconic Drive = The need to represent, to find shapes in what is seen (Gubern)

Image Spatiality = A still image expands as a way to remain in a temporal dimension that elapses no longer. Since there is no motion (time factor), space is conceived as a moment that elapses statically. (Jose Luis Brea) 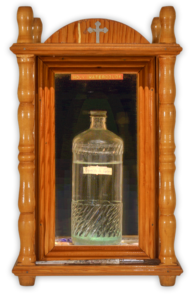 The apartment building where my grandparents, several of their children and I had lived for almost 70 years was sold by my family not long ago, and we had to evacuate. Once it was empty, I decided to make a final search. To my surprise, I found a rare bottle of water labeled “Water from St. Ignatius” inside a closet. I had no doubt that it was the famous holy water that people collect from the Company of Jesus temple in Puebla. I could not afford to overlook it so I took it along with me.

In 2019 I had a revelation from St. Ignatius of Loyola. He asked me to make watercolors by using this powerful water, and I thought that I might get a unique outcome. Would the outcome have been different if I had used plain water? I do think so, indeed.